If you take a cross section of the book of Revelation in the Bible, you will find that several different subjects come into to play.  Up front there is theology, since it's in the Bible, duh.  Next you start to notice how some of the imagery which is mentioned in other parts of the Bible comes into your microscope's focus.  That leads you to consider history.  As you continue to scan the samples on the glass slides you cut out of Revelation, you notice things like government or politics come into view.  Then you have to adjust the focus some more to think through how that applies to today.
The samples of Revelation I plan to focus on describe The Beast.  You know, that character that has inspired so many mediocre B-movies and heavy metal album covers. 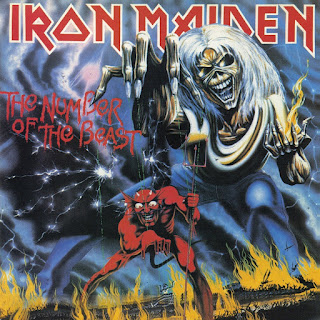 We have all known high school drop outs who giggled any time they saw the numbers '666' scrawled on a bathroom wall.  But there are some important lessons we can learn from studying who the Beast is and what the Mark Of The  Beast is all about.  I will try to dig deep to uncover truth about this topic and explain why it's important for today.
It all starts in Revelation 13.  Here is what it says.
1 And I saw a beast coming out of the sea. It had ten horns and seven heads, with ten crowns on its horns, and on each head a blasphemous name. 2 The beast I saw resembled a leopard, but had feet like those of a bear and a mouth like that of a lion. The dragon gave the beast his power and his throne and great authority. 3 One of the heads of the beast seemed to have had a fatal wound, but the fatal wound had been healed. The whole world was filled with wonder and followed the beast. 4 People worshiped the dragon because he had given authority to the beast, and they also worshiped the beast and asked, “Who is like the beast? Who can wage war against it?”
5 The beast was given a mouth to utter proud words and blasphemies and to exercise its authority for forty-two months. 6 It opened its mouth to blaspheme God, and to slander his name and his dwelling place and those who live in heaven. 7 It was given power to wage war against God’s holy people and to conquer them.
In this passage, the apostle John gives details about what the Beast looks like, how he talks, who he has power over, and how long he rules.  He who has ears, let him hear.
In this article I will compare the beast in Revelation to the vision Daniel sees of beasts in Daniel 7. In future articles I will cover a couple of other aspects of the beast.  Let's look at Daniel 7 which was written 500-600 years before Revelation.
Keep this in mind from John's vision.  10 horns.  10 crowns.  7 heads.  Coming out of the sea.  Body of a leopard.  Feet like a bear.  Mouth of a lion.  So what did Daniel see in chapter 7?  He saw four beasts also coming out of the sea.  What similarities do you observe?
3 And four great beasts were coming up from the sea, different from one another. 4 The first was like a lion and had the wings of an eagle. I kept looking until its wings were plucked, and it was lifted up from the ground and made to stand on two feet like a man; a human [e]mind also was given to it. 5 And behold, another beast, a second one, resembling a bear. And it was raised up on one side, and three ribs were in its mouth between its teeth; and thus they said to it, ‘Arise, devour much meat!’ 6 After this I kept looking, and behold, another one, like a leopard, which had on its back four wings of a bird; the beast also had four heads, and dominion was given to it. 7 After this I kept looking in the night visions, and behold, a fourth beast, dreadful and terrifying and extremely strong; and it had large iron teeth. It devoured and crushed and trampled down the remainder with its feet; and it was different from all the beasts that were before it, and it had ten horns.
The beasts which Daniel sees were a lion, a bear, a leopard, and one with ten horns.   The image was interpreted for Daniel later in the chapter.  Therefore, we know each of the beasts represent kings and the horns on the 4th beast are also kings.
Now compare that to Revelation.  The different parts of the Beast are made from the 4 beasts in Daniel; body of a leopard, feet of a bear, mouth of a lion, and 10 horns.  Not every detail lines up.  The Beast has 7 heads for instance.  Daniel's 4th beast has iron teeth and bronze claws which aren't included in Revelation.  But there is enough to see that the two beasts share many similarities.  Further, in Revelation 17:9-13, the 10 horns and 7 heads of the Beast are identified as kings just like the 10 horns of the 4th beast in Daniel's dream.
Taking all this into account I conclude two things.  First, the Beast in Revelation is also the 4th beast in Daniel's vision.  I believe this is true because of the visual similarities, but also because Daniel's 4th beast and Revelation's Beast both come out of the sea, declare blasphemies, make war against God and His people, rule for 42 months, and will be defeated by Jesus.  Second, the Beast also more generally represents earthly kingdoms or governments because he is an amalgamation of the other 3 beasts in Daniel.  He is one individual but even within his description you see a broader administration with the kings of the 7 heads and 10 horns.  The Beast is a composite or multilayered image being a representation of earthly political power but also a specific person having a prominent role in end time events.
There are a couple of implications to consider.  Categorically, it shows that earthly power in whatever form it takes ends up opposing God's authority.  Human authorities are set up by God to punish evil doers according to Revelation 13.  However, the counterbalance to this idea is that they tend towards corruption, instead becoming the evil doers themselves as seen in these passages.  In the next article I will take a closer look at the Beast looking at both Revelation and Daniel to understand his character and make some broader applications about how Christians should view government.