Showing posts from July, 2021
Show all

The Beast Of Revelation - Part 3 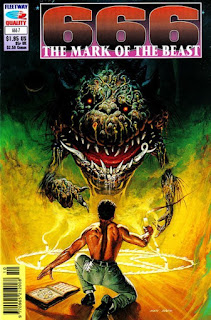 The Vision Of The Mark Of The Beast Revelation 13 16 And he causes all, the small and the great, and the rich and the poor, and the free men and the slaves, to be given a mark on their right hand or on their forehead, 17 and he provides that no one will be able to buy or to sell, except the one who has the mark, either the name of the beast or the number of his name . 18 Here is wisdom. Let him who has understanding calculate the number of the beast, for the number is that of a man; and his number is six hundred and sixty-six . The idea of the Mark of the Beast has probably captured the imaginations of pop culture even more than the Beast himself.  Nothing has ignited more fear and inspired more art ranging from thought provoking to brain dead.  I found some fun comic book cover art on the subject and interspersed it through the article for your enjoyment.  You can judge where in the provoking-to-brain dead spectrum they fall.  In this article I will first address what this mark means.
Post a Comment
Read more
More posts